Mt. Kanamo, 19,503 ft(5960 meters), is in Spiti district, Himachal Pradesh, sits there as a potentate. It gives the ecstatic view of the Spiti valley, just two eyes would not be enough, from it’s most elevated seat. The ethereal beauty of the Kanamo is that it is in the state of juxtaposition because it is a non-technical peak, trek-able and at the same time it is tough. The whole trek is a grind and it demands your hustle.

AsI brood in my comfortable abode on what went wrong when we went for the Kanamo trek, what pulled us off from that must-see view of Kanamo peak, all our faults are dawned on me.

After a gruelling 28 days of mountaineering course in Manali, we thought we are in super shape to make a 12 hour journey to Spiti on 29th day and trek the whole Kanamo peak on 30th day, partly because we are in rush and had to complete in a busy time frame.So, there it is, we pushed the D-day so far, it pushed us back while trekking.

As I mentioned, from Manali, we three guys made our way to Spiti. Siddanth from Mumbai, with his shades of grey hair, glasses and with all the contingency stuff in his backpack, you would think him as a geek when it is quite opposite. He may not have all the wisdom about world, but he knows his own body’s limits(both physically & mentally) like how a doctor knows the exact quantity of ecstasy before it can became lethal to dope. Pranay from Gujarat, tanned skin, curly hair and he is meant to be an outdoor guy and I, Bhanu from Andhra Pradesh, do not want to brag about me, let just say I faced the coldest summer in Spiti and hottest winter at my home.

When you rush something into the unknown, you tend to mess your plan. From Kaza(commercial town in Spiti valley), we cabbed to Kibber village(4,270 meters) as the trek starts from there. Since it was a off- season, the usual restaurants are closed which left us no food to pack but thankfully we found a home stay where the guy agreed to make some Aloo paratha. We were on clock and we should have started our trek already, so the order of 20 cut down to 5 Aloo Paratha and the pickle. The guy from Thinley home stay let us rent the tents and sleeping bags, very sweet guy though. 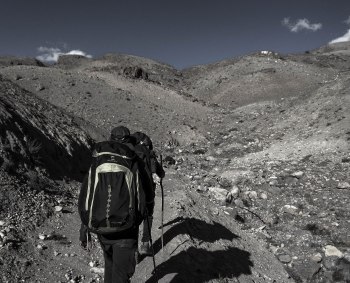 Just after we started

Sun about to set an hour later.

As we started from the bucolic Kibber into the east, for the first few hours we lilt our way through. Once we gain altitude, with the late noon breeze, started to give shivers to the bones. Admiring the landscape and the rough terrain of Spiti, as the bird eye view of the Kibber and Chicham faded, we went into the unknown. The irony is, we had no guide with us, we did not know the exact trail of the trek we ventured into. 28 days of Mountaineering gave us self-confidence, but I didn’t know it can be a vice. 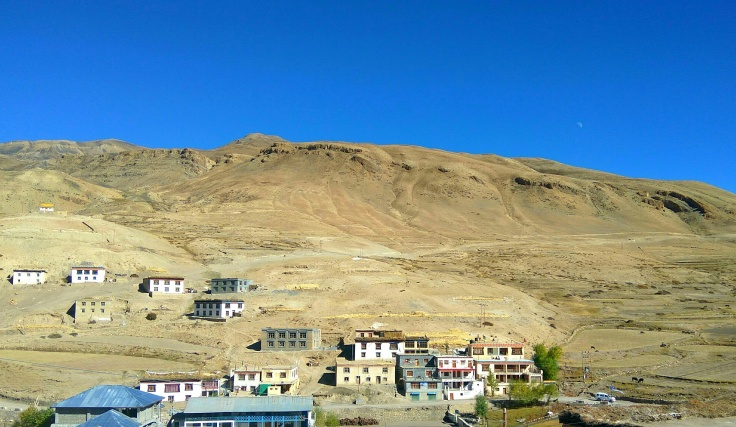 We pitched our 3-men tent after 3 hours of trek beside a small pond since it was almost dusk. After eating some nuts and coldest Aloo Partha with some pickle, we mumbled few stories. That pickle was really taken it’s toll, I can smell that cold, vibrant smell of pickle which had not left me till I came back home. Once I got rid of that smell, the fact that I missed that smell gave me a shudder.

Comfort for a night

The bushes that scattered all over the trek.

Anyway, we resumed the trek in the morning with renewed energy, through the trails filled with tiny green and red hinted bushes. One hour later, we found the base camp, all that time while trekking I wished that we could encounter at least one person who might be in the same pursuit as we were, my wish was puffed up when I saw the deserted base camp.

The path we have taken at base camp was the one we regret even now. At the base camp of Kanamo peak, there were two ways, one leads to south and another to north. As Robert Frost said “I have taken the road less travelled“, we have taken north. Few hours passed, we were passing gully after gully through a scree like a tide hoping we can see a trail. Nope, just as we feared, we took a wrong turn at base camp. We had an epiphany at noon that we were too far north-west to the peak.

On that trail-less gully with sun on our heads, we realised that even if we carried on, by the time we make the summit it will be almost sunset. We will have to make the descent after dusk, we might as well run naked. So, we thought we should head back to the base camp, stay one more night, ration our food and take southern, well travelled, route next morning.

Pranay, as stubborn as he was, made a run for the summit while the two of us head back to the base camp. By the time we reached the base camp, it was minutes away of sunset. There was no sign of Pranay, both of us started to worried for him. With the heavy winds pushing away, we struggled to pitch the tent, but not before one of the tent loop hit me in the eye. There was a sharp pain in the eye, due to high altitude, it became worse. I just rubbed it off and hoped it would be fine next morning.

We were content and thankful to see Pranay safe and sound. He reached base camp after the sunset, we were disappointed to hear that he did not make it to the summit. As he had an emergency at home, he descended back to Kibber in the dark, you cannot reason with the stubborn and strong minded guys, they are as dangerous as they come. That leaves us Siddanth and me.

The whole night was dreadful for me, with every passing second the ache in the eye was poking and I remember dreaming vividly, close to hallucinating, about fortunate events that can happen on our unfortunate night. We had not felt like waking up even after the dawn of next morning, it became clear we cannot make the ascent anymore as our bodies started to give in.

Siddanth, as sweet as he is, did a first-aid to my appalled eye, looked me in the exposed eye, “Mountain is not going anymore,” he said “today is not the day. Lets descend“. We both felt the same thing, packed everything and started the descent. With one eye covered as we descent, I really felt that was the one decision that we made perfectly in our whole trek.

Once we hit the Kibber, I kind of nauseated to the fact that with a brownish jacket, with a vicious pickle smell, one eye covered and a stick for support, I looked like a pirate. As we conveyed our story to the Thinley homestay guy, I was amazed because it was one hell of a experience.

Two days later in Manali, when Siddanth and me parted, we made a pact that we should climb the Mount Kanamo together in July of the following year. After all, if I heard it correctly, Kanamo means “white lady” and to conquer a lady , you should be persistent and have some patience with love.

7 thoughts on “Mount Kanamo and the Inglorious ascent”